It is immediately noticeable, that GEF is fairly complex and it needs a notable amount of work to get used to the framework. Therefore, and also to homogenize their tooling, SAP built a framework that hides GEF’s complexities from the developer and bridges EMF and GEF to ease and speed up the development of graphical editors.

The installation source of the updatest release is included in the official release update channel. Install the “Graphiti SDK Plus” which includes a tutorial in the help document. 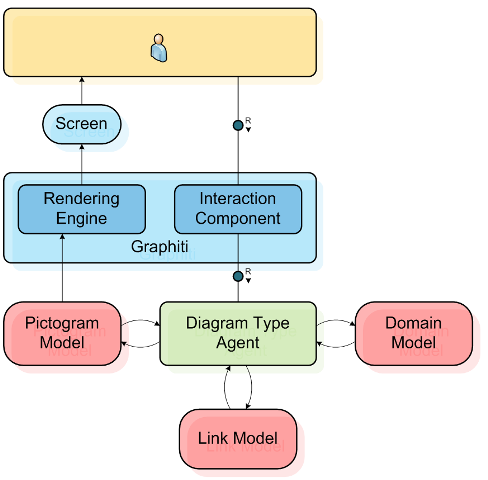 Example: User clicks on a kind of “Create” tool on the tools palette and draws a rectangle in the editor which indicates a rectangle object with the specified size and position should be created. Then the Diagram Type Agent act as following: 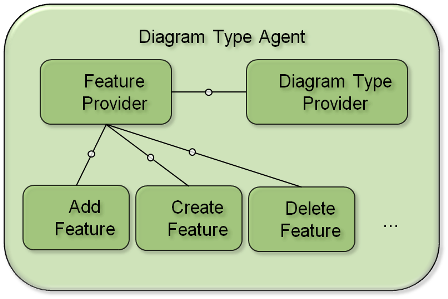 Features are needed from developers like operations. Feature Provider supplies the needed features. Processing the features leads to modifing the datas in the models. *Diagram Type Provider handels the requests from interactive components. It also decides when to synchronise the Domain and Pictogram Models.

The Diagram Type Agent is implemented in 4 steps:

Get familier with the Graphiti plugin development procedure with help of the official tutorial, step by step.

A diagram type agent should be implemented for creation of an editor of a viewer. As mentioned before, it consists of a diagram type provider and a feature provider

Add a new extension using the extension tab within MANIFEST.MF editor with the extension point org.eclipse.graphiti.ui.diagramTypeProviders. Set the corresponding ID, name, and set the class to the just created one.

Create a new Diagram Type of the Provider

After these steps, the plugin.xml file should looks like this: